Why red meat is making you fat... 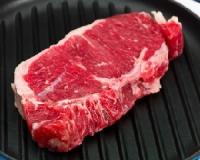 Do you enjoy juicy steaks?

Well, if you're watching your weight, you'll need to limit your red meat consumption - it's making you fat according to a recent study...

Researchers from Wake Forest Baptist Medical Center discovered that a diet high in iron interferes with the satiety hormone, leptin.

While there are other foods that contain iron, the iron in red meat is more readily absorbed than iron from plants.

It suppresses leptin, which in turn makes you feel less full - and like you want to eat more.

Discover the secret that upgrades your metabolism

If you’re sick of feeling sluggish and dull-witted…

Then what you’re about to hear will change everything you thought you knew about losing weight and living healthy.

Because what I’m talking about is a natural way to:

And it’s all down to three common nutrients that offer generic health boosting benefits on their own but, when used together, instantly upgrade your metabolism to feast on fat – no matter what your age. Find out more here…

In the study published in the Journal of Clinical Investigation, the lead researcher, Don McClain, who is also the director of the Centre for Diabetes, Obesity, and Metabolism, reported that the mice fed more iron ate more than those fed less.

Even levels in the high-normal range resulted in a bigger appetite. Leptin levels in the blood of the group with higher iron levels was 42% lower than in the low to normal iron range group.

So, if you're watching your weight, limit the number of meals containing red meat to one or two per week. Instead, eat chicken, turkey, fish - especially fatty fish like salmon, tuna, sardines and mackerel.