Cinnamon may help counteract an overload of calories! 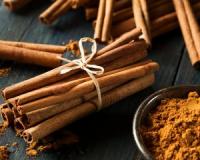 Can cinnamon help counteract an overload of calories? That's what a new study conducted by researchers at the University of Michigan Life Sciences Institute in the United States suggests.

The study found that cinnamaldehyde, the essential oil that gives the common holiday spice its flavour, ramps up metabolism to burn fat. Read on for the full findings.

Mice studies have linked cinnamaldehyde to protection against hyperglycaemia and obesity

In past studies, cinnamaldehyde appeared to protect mice against hyperglycaemia – high blood sugar – and obesity, but researchers didn’t understand how it worked.

Wu her and her colleagues tested human adipocytes – cells that store fat – from participants representing a range of boss mass indices, ages and ethnicities. Adipocytes normally store energy in the form of lipids. This long-term storage was beneficial to our distant ancestors, who didn’t have as much access to high-fat foods and therefore had a greater need to store fat that they could them use in cold temperatures or times of scarcity.

When the team treated the cells with cinnamaldehyde, they observed increased expression of several genes and enzymes that enhance lipid metabolism. What’s more, the team noticed an increase in Ucpl and Fgf2l, which are important metabolic regulatory proteins involved in thermogenesis – the production of heat through metabolism. They concluded that cinnamaldehyde improves metabolic health by acting directly on fat cells, inducing them to start burning energy through thermogenesis.

“It’s only been relatively recently that energy surplus has become a problem,” Wu said. “Throughout evolution, the opposite – energy deficiency – has been the problem. So, any energy-consuming process usually turns off the moment the body doesn’t need it,” she concluded.
Tags: fat burn

Cinnamon may help counteract an overload of calories!
Rating:
Note: 5 of 1 vote