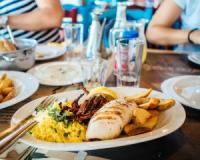 Everyone knows that it's impossible to lose weight if you eat out at restaurants most days of the week.

But it may come as a surprise that the number one habit that's sabotaging your weight loss efforts is spending time at restaurants and bars, where you're most likely to succumb to your temptations...

This goes according to a study that was presented at the recent meeting of the American Heart Association. Keep reading for the full scoop.

The year-long study investigated tempting foods and the behaviours they trigger. Using a smartphone app, researchers from the University of Pittsburgh in Pennsylvania, USA followed 150 overweight participants – most of whom were women – who were trying to follow a diet plan.
The participants checked in up to five times each day and reported where they were, who they were with and if they’d cheated on their diet. They also logged in every time they ate foods or portion sizes that weren’t in line with their diet plan.
From this deluge of data, researchers were able to draw up some certain conclusions. For one, they found that participants reported the most temptations when they were in a restaurant or bar or in the presence of other people eating.  On the flip side, they noted fewer desires to overeat at home or work – and even fewer in other people’s homes or in their car.
Overall, researchers found that participants were 60% more likely to cheat on their diet at restaurants or bars when they were around other people eating.
Eating at home was a safer bet, but not completely foolproof – while people reported fewer temptations in their own homes or friends’ houses, when those desires to cheat did appear, they gave in almost 65% of the time. Even when they were alone at home, they lapsed about 50% of the time.
However, their odds of succumbing to their temptation at work in the car were significantly lower – about 40% and 30% respectively.

*** Get rid of your cellulite completely NATURALLY! No gimmick creams, injections or pain required... Do you exercise regularly, run on the treadmill for hours and eat healthy but when you squeeze your butt in the mirror... All you see is orange peel?   And the only way to hide it is to cover it up. But not anymore and it doesn’t involve creams and painful surgery. I have the solution to help you Beat Your Cellulite – NATURALLY!     It’s time to say good-bye to your cellulite for good, click here now! ***

“You might think that everybody knows they’re at higher risk when they go into a restaurant, but people go out into these toxic environments and they forget,” says lead author Lora Burke, professor of nursing at the University of Pittsburgh.
“We remind people that it’s not a diet they can go on and off; it’s a lifestyle. It’s okay if they want to go out Friday night and eat wings, but then they need to cut back on Thursday and Saturday,” she adds.
Burke says that there aren’t any smartphone apps available to help evaluate this kind of data yet, but such tools could be incredibly useful for helping people realise and adapt to their diet-related flaws.
“We can go to an individual and say, ‘These are the high-risk situations you’re vulnerable to, so you need to keep your guard up and practice strategies for sticking with your plan,’” she says. “We could even intervene by sending a message right back to them when they need it, reminding them of why they may need to work really hard.”
Assessing eating habits in the moment may also give researchers insight into more accurate, detailed data. “When we ask people to recall what they ate and how they felt, there are a lot of biases and problems remembering,” says Burke. “This way, we can be there as people are going through weight-loss challenges and find out exactly what they’re feeling, and when.”
Tags: weight loss, weight loss tips, healthy eating, healthy eating habits, diet, diet plan, temptation, cheat meal, eating out, weight gain, nutrition tips