You're not alone! Up to 75% of women also suffer from low sexual desire - and it's actually a medical condition 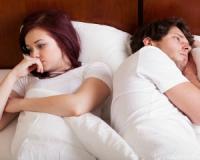 After a long day, you arrive home and your partner wants to have sex. But if you're honest with yourself, you're just not feeling up to it. You blame the same libido-squashing culprit as you did last night - you're feeling downright exhausted. Soon enough, you begin asking yourself, “Is this normal?”

The answer is yes - it's totally normal. In fact, research shows that up to 75% of women suffer chronically from low sexual desire - also known as hypoactive sexual desire disorder (HSDD) - and that it interferes with their quality of life. Despite how common this problem is, it isn't well understood.

To learn more about the symptoms and culprits of HSDD, read on!

In simple terms, HSDD is a form of sexual desire disorder. Women who suffer from this medical condition have little to no sexual fantasies or desire for sexual activity that causes interpersonal difficulty or marked distress.

While this sexual concern is common, it’s under-recognised and under-reported – and it can take a serious toll on a woman’s self-esteem and romantic relationships!

*** Now, there’s a fast and easy way to help ensure you’re in control of your sex life… Introducing a new and improved nutritional supplement that gives your body the foundation it needs — so you could have sex whenever you want to! But the real genius behind this natural supplement is its three-pronged approach to super-charging your sex life. We like to call it “Triple Action”... Its Triple Action formula just might be the most comprehensive supplement for your sexual health yet. Find out more here ***

However, only 14% of these women were aware that HSDD is actually a medical condition.

Research also shows that low sexual desire, also known as FSD, is the most common form of female sexual dysfunction. FSD refers to a disturbance in a woman’s sexual functioning.

According to the HealthyWomen and Palatin Technologies survey, which looked at 906 premenopausal women, 46% experienced low sexual desire. It also found that 60% of these women were distressed about their dulled desire for sex.

All in all, the survey concluded that 75% of women – both premenopausal and menopausal – suffered from HSDD. That’s a large number!

If you suspect that you have HSDD, you should talk to your partner and a health care professional about it. If you ignore the problem, it can become life-disrupting and cause trouble in your relationship – don’t suffer in silence!

You're not alone! Up to 75% of women also suffer from low sexual desire - and it's actually a medical condition
Rating:
Note: 5 of 1 vote