Treating depression is easier with this new blood test 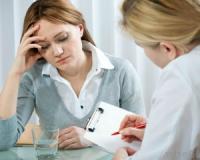 Treating depression has been a challenge up until now. While doctors previously used to write prescriptions for depression patients based on what was essentially educated guesswork, they are now able to select the most helpful type of medication thanks to a newly developed blood test.

This new blood test, which was developed by researchers at UT Southwestern, provides more accurate information for doctors based on levels of a protein known as C-reactive protein (CRP) in patients' blood samples. Of course, this new blood test is expected to equally benefit depression patients. Keep reading for the full story…

“This outcome happens because they give up,” said Madhukar Trivedi, director of the depression centre at UT Southwestern’s Peter O’Donnell Jr Brain Institute.

“Currently, our selection of depression medications is not any more superior than flipping a coin, and yet that is what we do,” said Trivedi. “Now we have a biological explanation to guide treatment of depression.”

Trivedi’s previous national study, which established widely accepted treatment guidelines for depression patients, read: “Giving up hope is really a central symptom of the disease. However, if treatment selection is tied to a blood test and improves outcomes, patients are more likely to continue the treatment and achieve the benefit.”

Treating depression is easier with this new blood test
Rating:
Note: 5 of 1 vote