Too much red or processed meat boosts risk of a fatty liver! 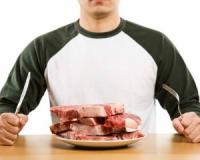 High intake of red meat is tied to high LDL cholesterol levels and an increased risk of heart disease and type 2 diabetes, while The World Organization classifies processed meats as a Group 1 carcinogen, which means there's strong evidence that processed meats cause cancer.

As if we needed another reason to cut back on red and processed meat, a new Israeli study has just unveiled that these meats can contribute to an increased risk of non-alcoholic fatty liver disease (NAFLD). Keep reading for the full findings as published online in the Journal of Hepatology.

The study was carried out by researchers at the School of Public Health, Faculty of Social Welfare and Health Sciences, University of Haifa. The team looked at about 800 participants between ages 40 and 70, some of whom had NAFLD or insulin resistance, a condition in which cells fail to take up sugar in response to the hormone insulin. Insulin resistance is a major risk factor for type 2 diabetes.

The participants reported on their meat consumption and cooking methods. Frying and grilling to a level of well done or very well done were considered to be unhealthy cooking methods, as they produce pro-inflammatory compounds known as heterocyclic amines (HCAs).

The team found that participants who consumed a lot of meat were mainly male, slightly younger, had a higher body mass index (BMI) and caloric intake, and a worse metabolic profile. Those who had a high intake of red and processed meat were also more likely to have NAFLD and insulin resistance, regardless of how much saturated fat and cholesterol they consumed and other risk factors, such as BMI.


*** Drive out a lifetime of toxins and you could soon be saying, "I'm Brand New!" If you’ve ever suffered terrible headaches... Or uncontrollable joint pain... If you’ve ever felt listless and sapped of energy... Or immobilised by colon cramps... I’ll bet you’ve wondered hundreds of times... WHY ME??? But it’s not just you. It’s an epidemic. Millions of people are going to their doctors, complaining of these symptoms, only to hear them say “live with it”… But that’s exactly the problem. We’re living with dozens of 21st century poisons. Recent studies have now proven: Is there any end to all this bad news? Now, at last, there is. Because now, one of alternative medicine’s true pioneers is proving that you could save yourself a lifetime of suffering caused by these poisons.  Find out more here...
***

What’s more, participants who consumed large amounts of meat cooked using unhealthy methods, and those already diagnosed with NAFLD who also consumed high levels of HCAs, had higher odds of having insulin resistance.

Although red meat is high in nutrients such as protein, iron, vitamin B12 and zinc, you should still consume it in moderation. Reduce your red and processed meat intake by swapping them for white meat, such as chicken, fish and turkey.

Another way to be healthier is to steam or boil your food instead of grilling or frying meat at a high temperature until it’s very well done.
Tags: fatty liver

Too much red or processed meat boosts risk of a fatty liver!
Rating:
Note: 5 of 1 vote