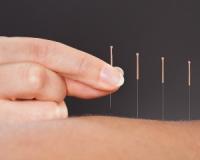 Are you pregnant and experiencing gastrointestinal troubles like heartburn, acid reflux, bloating and an upset stomach? Don't worry, it's completely normal - and totally treatable!

According to a new Brazilian study lead by Dr Joao Bosco Guerreiro da Silva of Rio Preto Medical College in Sao Jose do Rio Preto, acupuncture may help you put these digestive problems to an end!

Past research has assessed acupuncture's effectiveness as a treatment for nausea and vomiting in pregnant women. But this new study is the first of its kind to look at the link between acupuncture and reduced pregnancy-related stomach symptoms. To learn more about this interesting new study, read on!

The study included 42 randomly selected pregnant women with dyspepsia – a discomfort in the chest or upper abdomen that’s described as a feeling of fullness, burning or gas. Each of these women underwent either standard treatment or acupuncture for eight weeks.

Every two weeks, the researchers asked the study subjects about their digestive problems – or, more specifically, their heartburn symptoms, how many antacid tablets they were taking and how their digestive woes were affecting their sleeping and eating routines.

The researchers also found that seven women in each group used antacids at the start of the study. In the end, those in the acupuncture group’s average dosage fell by 6.3 doses, compared to 4.4 doses in the control group.

Now, you’re probably wondering just how safe it is to have acupuncture while you’ve got a bun in the oven. Good news! The researchers behind the study confirmed that there were no side effects whatsoever of acupuncture during the stuff. They also found no differences between the babies born to the women in the acupuncture and control groups.

However, the researchers did warn against using acupuncture points in the lower abdomen or lower back in pregnant women. They explained that needling in these areas could potentially trigger contractions.

This treatment will ease all of your gastrointestinal woes during pregnancy - from heartburn to bloating
Rating:
Note: 5 of 1 vote