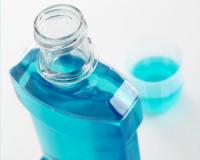 Ever heard of the sexually transmitted disease (STD) gonorrhoea, also known as “the clap”? The STD, which is caused by the bacterium Neisseria gonorrhoeae, is fairly common - and the infection rate just keeps rising! Research shows that the STD is most common in bisexual and gay men.

While most people with gonorrhoea show no symptoms, men sometimes experience testicular pain or burning with urination.

So is there a cure for this STD? Apparently, yes - and it'll startle you - it's Listerine! That's correct, your go-to mouthwash may be an effective cure for gonorrhoea, according to a report published in the journal Sexually Transmitted Infections.

According to the 2005 book Freakonomics, in the 19th century before the advent of antibiotics, Listerine was sold for what it was originally invented for - to be used as a surgical antiseptic. Later, it was sold as a floor cleaner, and then a gonorrhoea cure. Only in the 1920s did it become a successful solution for bad breath.

Now, over a 100 years later, scientists say that the claim that Listerine can cure gonorrhoea may in fact be true...

Gonorrhoea is an STD that’s spread through unprotected sex. For the study at hand, researchers grew cultures of Neisseria gonorrhoeae bacteria in their laboratory and then applied two different dilutions of two different kinds of Listerine mouthwash.

They added that subjects who rinsed their mouths and gargled with the mouthwash had less gonorrhoea bacteria in their throat compared to those who used a saltwater solution five minutes after use.

The team concluded that rinsing your mouth with Listerine may be a “cheap and easy” way to control and prevent gonorrhoea and possibly other STDs as well. The Australian research team noted that while there are claims that date back to 1879 that Listerine treats gonorrhoea, no published scientific studies had tested this.

“Listerine mouthwash is a cheap, easy-to-use and effective agent that inhibits gonorrhoea growth and requires further careful consideration and study,” the researchers wrote in their report.

Report reveals that mouthwash may be a cure for the sexually transmitted disease gonorrhoea
Rating:
Note: 5 of 1 vote