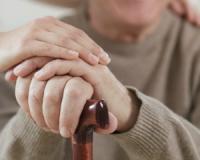 The researchers behind the tool published their study, which was funded by the National Institute of Neurological Disorders and Stroke (NINDS) in the journal Lancet Neurology. Their findings revealed that the tool may help predict a Parkinson's disease patient's risk for developing dementia and enable clinical trials aimed at finding treatment to prevent cognitive decline and other mental wellness problems.

Read on for the full findings on this interesting new study...

Parkinson’s disease may be a movement disorder, but it can also boost risk of mental problems...

“This study includes both genetic and clinical assessments from multiple groups of patients,” Margaret Sutherland, program director at the NINDS, said.

“And it represents a significant step forward in our ability to effectively model one of the most troublesome non-motor aspects of Parkinson’s disease.”

To reach their findings, the researchers evaluated seven known risk factors – both genetic and clinical – associated with developing dementia in combined data from 3,200 people with Parkinson’s disease. Overall, they carried out more than 25,000 individual clinical assessments.

The research efforts resulted in a computer-based risk calculator that may predict the chance than a Parkinson’s disease patients will develop mental problems such as cognitive decline. The researchers noted that one barrier to developing treatments for the mental wellness effects of Parkinson’s disease is the considerable variability among patients.

“By allowing clinical researchers to identify and select only patients at high-risk for developing dementia, this tool could help in the design of smarter trials that require a manageable number of participating patients,” Clemens Scherzer, head of the Neurogenomics Lab and Parkinson Personalized Medicine Program at Harvard Medical School, said.

The researchers concluded that education still appears to have the greatest effect of the risk of memory loss. They found that the more years of formal education patients in their study had, the greater their protection against mental problems like cognitive decline.
Tags: mental problems