Ladies, is your love for seafood putting you at heightened risk of autoimmune disease? 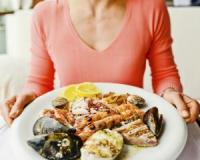 There's nothing like digging into a delicious platter of fish, prawns, mussels and other seafood delights, is there?

And the best part is that consuming seafood is associated with several health benefits, considering it's chock-full of a wide variety of vitamins and minerals including vitamins A and D, phosphorus, magnesium and selenium.

Some research even shows that fish offers protection against heart disease and stroke thanks to the high levels of heart-healthy omega-3 fatty acids that it contains.

However, new research published in the journal Environmental Health Perspectives is now suggesting that there may be a downside to eating seafood if you're a woman of childbearing age.

According to the research, seafood with high mercury levels may put women who fall into this bracket at heightened risk of autoimmune diseases...

Autoimmune diseases are a serious health issue today. According to University of Michigan researchers, approximately 50 million people in America alone suffer from some sort of autoimmune disease. And majority of these sufferers are women.

Common autoimmune diseases include multiple sclerosis, lupus, rheumatoid arthritis, inflammatory bowel disease and Sjogren’s syndrome. While doctors and researchers have confirmed that these disorders aren’t explained by genetics, it’s understood that they develop when your body’s immune response goes away and starts attacking your healthy cells.

Emily Somers, study author and associate professor in the departments of internal medicine in the division of rheumatology, environmental health sciences, and obstetrics & gynaecology at the University of Michigan Medical and Public Health Schools, admitted: “We don't have a very good sense of why people develop autoimmune disorders.”

“A large number of cases are not explained by genetics, so we believe studying environmental factors will help us understand why autoimmunity happens and how we may be able to intervene to improve health outcomes. In our study, exposure to mercury stood out as the main risk factor for autoimmunity,” Somers explained.


************ Just for you ***********
Finally, a real solution to balance the deficiencies of our modern food supply
The typical multivitamins you find in your supermarket are a careless concoction of randomnutrients that have little to do with the problems in your environment and food supply.
But I’ve discovered a formula that gives you back everything you’re missing from your modern diet. A formula designed to replace what you’re not getting from the food at your local grocery store.
You can find out more about it, here.
*********************************


Researchers point out that swordfish, king mackerel and tilefish are all known to be high in mercury

On the other hand, seafood like canned light tuna, salmon and shrimp contain lower levels of mercury, according to researchers. They conclude that this makes any mercury-immune disorder connection very concerning for women of childbearing years.

Furthermore, the US Food and Drug Administration (FDA) and the Environmental Protection Agency have both long said that eating up to 340 g of seafood a week is completely safe for pregnant ladies.

To reach their findings, researchers focused on government data that looked at women between the ages of 16 and 49 between the years 1999 and 2004. They found that the higher the exposure to mercury, the higher the rate of proteins known as “autoantibodies”.

Your body generates these proteins when your immune system is faulty and can no longer tell healthy cells apart from harmful ones. The presence of autoantibodies is an indicator and precursor of autoimmune disease.

However, researchers noted that while they found a strong association between mercury exposure and autoimmune disease development, they weren’t able to prove cause-and-effect. “The presence of autoantibodies doesn't necessarily mean they will lead to an autoimmune disease,” Somers cleared up.

Ladies, is your love for seafood putting you at heightened risk of autoimmune disease?
Rating:
Note: 5 of 1 vote