It may not be all theatrics! Women appear to fight off the flu more easily than men, two studies show 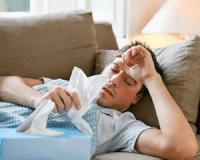 If you've ever nursed a man with a respiratory infection, you've noticed how quickly even the manliest of man can be totally taken out by an itty bitty case of the flu.

And you're probably all too familiar with the drama that comes with it - the non-stop complaints of agony and multiple requests for tea, orange juice and osup. (If it isn't too much trouble, of course!)

But as it turns out, it may not be all theatrics - two recent studies show that there may actually be something behind the “man flu” phenonemnon after all!

The first study was an animal study published in the journal Life Sciences. To arrive at their conclusion, researches behind this study exposed mice to bacterial pneumonia.

They found that the female mice were “naturally more resistant” to the bacteria than the male mice, who they treated with oestrogen. The Daily Mail reported that this might suggest that the female hormone plays a protective role in the flu. But keep in mind that this study was of bacteria, not viruses, like the common cold or the flu.

Discover why the natural approach to colds and flu prevention is more effective than modern-medicine...

The natural approach to protecting you and your family from colds and flu has been overshadowed by the pharmaceutical industry for far too long!

After all, with modern medicine come unwanted side effects that could result in long-term health complications.

The stats don’t lie! Just because you get a flu shot, doesn’t mean you won’t end up getting sick or have to resort to paying a visit to your doctor...

However, the second study, which was conducted by researchers at Standford University in Connecticut in the US, found that the flu vaccine stimulated more protective antibodies in women than in men. They also found that high testosterone levels in men were linked to an even weaker response. The researchers told The Independent that this might explain why men are more susceptible to infections in general.


A few quick tips for men to prevent the flu

Apart from cutting your man some slack next time he catches the flu, make sure he goes all out to prevent getting the infection this winter...

Remind him to get a flu shot (testosterone won’t negate the vaccine’s effectiveness completely), drink plenty of water, fill up on antioxidant-rich fruits and vegetables and wash his hands. After all, he needs all the help he can get!
Tags: cold and flu, common cold, common cold symptoms, common cold treatment, natural treatment for cold and flu, infection, respiratory infection

It may not be all theatrics! Women appear to fight off the flu more easily than men, two studies show
Rating:
Note: 5 of 1 vote