If you've ever injured your head and passed out, you're at heightened risk for Parkinson's disease 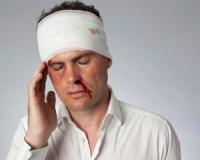 Nearly 1,000,000 people in America alone suffer from Parkinson's disease, a chronic and progressive movement disorder that affects your central nervous system. What's even more frightening is that the cause is unknown and there's no cure…

However, according to a brand new study published in JAMA Neurology, people who have suffered traumatic head injuries and lost consciousness are at higher risk of developing Parkinson's disease later in life.

Could it be the head injury itself that initiate the cascade of events that ultimately lead to Parkinson's disease? Lead researcher Dr Paul Crane, professor of medicine at the University of Washington School of Medicine in Seattle, US, tells all…

For the study, Dr Crane and his team looked at data on more than 7,000 older adults at an average age of 80. Among the subjects, 865 had suffered a head injury and lost consciousness at some point. Out of these subjects, 142 were unconscious for over an hour. The team found that over 1,500 subjects suffered from some type of dementia, while 117 had Parkinson’s disease.

The research team found a significant link between brain injury with loss of consciousness for more than an hour and a heightened risk for Parkinson’s disease. The team also found that head injury sufferers were at increased risk of microscopic stroke. They didn’t, however, find a correlation between head injury and loss of consciousness and heightened risk for dementia.


********RECOMMENDED********
Is it just a bad memory? Or the early signs of Alzheimer's disease?
You know what it’s like to forget a name, misplace your keys, or lose your train of thought. It happens to everyone every so often.
But if you find yourself often repeating a question, forgetting your friends’ names or where you parked your car, it’s important you take five minutes to read this urgent alert NOW…
*********************************

The team couldn’t find a reason as to why head injury and loss of consciousness may increase your risk for Parkinson’s disease. However, Dr Mill Etienne, spokesperson for the American College of Neurology, strongly suggests that everyone takes protective measures when participating in activities when a head injury is likely.

If you've ever injured your head and passed out, you're at heightened risk for Parkinson's disease
Rating:
Note: 5 of 1 vote