Exposure to trees and greenery can help stave off depression 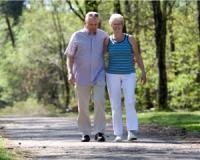 You've heard the saying that goes, ‘nature is good for the mind, body and soul'. Now, there's some scientific evidence to back up this claim.

A study published in the Journal of Adolescent Health shows that exposure to trees and other greenery staves off depression in adults and that the same may be true for teenagers.

Read on for the full findings…

Nature really is good for the mind, body and soul, study shows

To reach their findings, the researchers looked at more than 9,000 kids between ages 12 and 18. They found that those who lived in areas with lots of natural vegetation nearby were less likely to display high levels of depression symptoms. They noted that the effect was strongest among middle-schoolers.

“Prior research has shown that lower exposure to nature is associated with more negative emotional and behavioural outcomes,” said lead author Carla Bezold of the Harvard TH Chan School of Public Health in the United States.

To determine whether or not this is true during teenage years, the researchers analysed data on 9,385 adolescents who began participating in a large study in 1999. The participants had mental health assessments and also provided information about race, environmental safety issues and substance abuse in an annual questionnaire.


Study links exposure to trees and greenery to an 11.5% lower risk of ‘high depression’

Bezold’s team found that 11.5% of the participants had depression symptoms and categorised the top 11.5% of that group with the highest levels of symptoms as having ‘high depression’, then looked at how nearby green and blue space influenced whether participants fell into that category.

“We saw that living in an area that was greener was associated with lower depression among this population,” said Bezold. “We also found that the association persisted using a number of statistical techniques, which gives us confidence that the association is there and so are the benefits.”

Overall, adjusting for family and economic factors, Bezold’s team found that young people living amid the highest-quality green spaces were 11% less likely than peers with poor quality green space to be in the high depression group. Interestingly, they found no significant association for blue spaces.
Tags: depression

Exposure to trees and greenery can help stave off depression
Rating:
Note: 5 of 1 vote