Eating nuts, chicken and fish instead of meats, eggs and dairy can drastically reduce your risk of dying, according to Harvard researchers 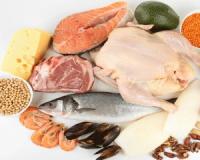 You know that consuming enough protein is essential to any balanced diet. But do you know that there are specific proteins you should and shouldn't eat?

Their study, which was published in the Journal of the American Medical Association (JAMA) has surprised doctors all over the world...

For the study, researchers at Harvard University spanned three decades and more than 130,000 people. The study was observational so it didn’t probe the biological reasons behind the changes in death risk according to a person’s diet, nor did it demonstrate cause and effect.

The researchers found that diets in red meat and other high-fat proteins like eggs and cheese weren’t at higher risk of dying among people who were otherwise healthy. However, they noted that people with one other risk factor – like being inactive, overweight, smoking or drinking alcohol regularly – were likely to see their death risk rise is they ate lots of red meat.

“Our findings suggest that people should consider eating more plant proteins than animal proteins, and when they do choose among sources of animal protein, fish and chicken are probably better choices,” said study co-author Mingyang Song, a research fellow at Massachusetts General Hospital in the US.

“While previous studies have primarily focused on the overall amount of protein intake – which is important – from a broad dietary perspective, the particular foods that people consume to get protein are equally important,” Song added.


************ Just for you ***********
Finally, a real solution to balance the deficiencies of our modern food supply
The typical multivitamins you find in your supermarket are a careless concoction of randomnutrients that have little to do with the problems in your environment and food supply.
But I’ve discovered a formula that gives you back everything you’re missing from your modern diet. A formula designed to replace what you’re not getting from the food at your local grocery store.
You can find out more about it, here.
*********************************


Researchers suggest getting your protein from breads, cereals and pasta instead of beef and pork

When the researchers analysed what kinds of protein were associated with higher mortality risk, they found them to be mainly processed and unprocessed red meats, including beef and pork.

They linked the lowest mortality rate to people who got their protein mostly from breads, cereals, pasta, beans, nuts and legumes. Song reported that the researchers were very surprised to see that there was no apparent higher risk of dying among otherwise healthy red meat eaters. So eating a steak on the odd occasion isn’t too unhealthy after all, provided you lead an otherwise healthy lifestyle.

Eating nuts, chicken and fish instead of meats, eggs and dairy can drastically reduce your risk of dying, according to Harvard researchers
Rating:
Note: 5 of 1 vote