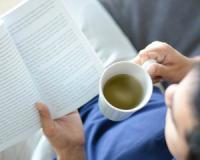 For the study, lead author Dr Babitha Nugala, an internationally renowned expert on periodontal disease, reviewed more than 20 studies of the beneficial role of green tea in reducing the risk the disease.

Dr Nugaka concluded that two to three cups of green tea daily can cut the risk of periodontal disease. This finding is ironic considering many people shun tea, green or black, because they fear stained teeth. Read on for more.

Healthy gums are critical to maintaining a healthy body…

Periodontal disease is a treatable inflammatory condition characterised by symptoms such as loose teeth, swollen or bleeding gums and persistent bad breath.

When the victim suffers no pain and the only symptom is painless, minor gum bleeding, periodontal disease often goes untreated. However, this is often early-stage gum disease that worsens over time. According to the Centers for Disease Control and Prevention, nearly 50% of all Americans have periodontal disease of various levels of seriousness.

“Periodontists believe maintaining healthy gums is absolutely critical to maintaining a healthy body,” explains Dr David Cochran, former president of the American Academy of Periodontology, chair of the periodontics department at the University of Texas Health Science Center in the United States and author of numerous articles and academic papers on periodontal matters.

Dr Nugala’s study found that modest drinking of greens tea – that’s two to three cups per day – appeared to lower the risk of periodontal disease by around 20%.

“The healthful properties of green tea are largely attributed to polyphenols, chemicals with potent antioxidant properties,” Dr Nugala said. “The antioxidant effects of polyphenols appear to be greater than those of vitamin C. Polyphenols contained in teas are classified as catechins,” he added.

What’s more Dr Nugala said there are no studies to establish the relationship of green tea consumption and tooth staining – so you have no excuse not to make it a habit to maintain healthy gums!
Tags: periodontal disease