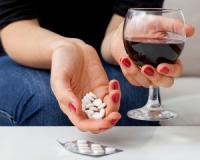 Do you take painkillers and then drink alcohol? If yes, you'll be shocked to know that a new study published online in the journal Anaesthesiology has revealed that doing so can trigger a potentially deadly respiratory problems - especially in seniors.

Here's how alcohol worsens the effect of opioids plus how it takes with a modest amount of alcohol to put yourself at risk...

None of the study participants had taken this type of painkiller previously.

Dahan and his team were startled to find that taking a single oxycodone painkiller with a modest amount of alcohol increased the risk of respiratory depression, also known as hypoventilation.

According to the US National Institute on Drug Abuse, a whopping two million Americans abuse prescription opioids.

Even scarier? According to the US Centres for Disease Control and Prevention, every day, about 78 people in America die from overdosing on opioids. And research confirms that majority of these deaths usually involve other substances, such as alcohol.

Dahan spoke out in a news release, “We hope to increase awareness regarding the dangers of prescription opioids, the increased danger of the simultaneous use of opioids and alcohol, and that elderly people are at an even greater increased risk of this potentially life-threatening side effect.”

“Ultimately, people should know that it is never a good idea to drink alcohol with opioids,” he added.