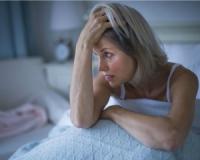 If you're a woman with menopause, you're all too familiar with sleep disturbance and how it can create an array of adverse health outcomes including depression, hypertension and heart disease.

A new study published in Menopause, the journal of The North American Menopause Society (NAMS), shows that sleep problems are also tied to lower levels of sexual satisfaction.

Could this be the reason why you haven't been “in the mood” lately? Keep reading to find out more about this breakthrough study...

Researchers behind the study analysed 93,668 women between ages 50 and 79 who were part of the Women’s Health Initiative Observational Study.

Among the women in the study, the prevalence of insomnia was 31%. Of these women, 56% reported being somewhat very satisfied with their current sexual activity and 52% reported partnered sexual activity within the last year.

Researchers concluded that short sleep duration – defined as fewer than seven to eight hours of sleep per night in the study – was linked to lower odds of sexual satisfaction.

***
Now, there’s a fast and easy way to help ensure you’re in control of your sex life… Introducing a new and improved nutritional supplement that gives your body the foundation it needs — so you could have sex whenever you want to! But the real genius behind this natural supplement is its three-pronged approach to super-charging your sex life. We like to call it “Triple Action”... Its Triple Action formula just might be the most comprehensive supplement for your sexual health yet. Find out more here ***

The association of sleep disturbance and sexual function in postmenopausal women described the relationship between sleep length and quality with sexual satisfaction remained the same after accounting for other common causes of sleep deprivation such as chronic disease.

However, researchers noted that this differ across the age groups: For example, older women were less likely to be sexually active if they slept for less than seven to eight hours per night compared to younger women.

In fact, women age 70 and up who slept fewer than five hours were 30% less likely to be sexually active compared to those in the same age group who slept seven to eight hours. Researchers noted that it’s already known that the prevalence of sleep problems increases with age.

“Women and healthcare providers need to recognize the link between menopause symptoms and inadequate sleep and their effects on sexual satisfaction,” said Dr Jo Ann Pinkerton, executive director of NAMS.