Warning! Your mouthwash could cause you heart failure 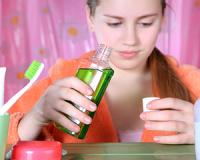 A new study reveals that some antiseptic mouthwash contain a chemical called chlorhexidine that's so effective at wiping out bacteria. It's also getting rid of the good bacteria. And losing good bacteria in your mouth can trigger potentially deadly heart problems.

For seven days, researchers in the UK measured the blood pressure of 19 volunteers.
For another seven days, these volunteers washed their mouths twice everyday with the chlorhexidine mouthwash. Here’s what happened:
There was a noticeable effect on the very first day. Mouthwash use spiked blood pressure almost immediately.
Why?
Researchers believe the loss of the good bacteria causes a suppression of nitrate, the compound you need to relax blood vessels.
And while not all mouthwash contains chlorhexidine, researchers believe that other antiseptic mouthwashes that wipe out bacteria produce similar results. And the problems with mouthwash don’t stop there.

Mouthwash that contains alcohol is even worse for your health


Five years ago, a study on approximately 3,200 volunteers found that daily use of mouthwash containing alcohol increases the risk of oral cancer. When alcohol collects in the mouth, a toxic metabolite accumulates. It’s called acetaldehyde; a “probable human carcinogen,” according to the Environmental Protection Agency (EPA).

Is this a risk you’re willing to take?

Find out what it is here…

Revealed: The best natural mouthwash to wipe out your bad breath


A healthier, natural alternative to keep your bad breath at bay is to chew on a sprig of parsley. It has the same effect as any mouthwash. Parsley contains chlorophyll which has germ-fighting qualities and an excellent breath freshener.

So there you have it. A smart way to clean your mouth AND protect the health of your heart!

Warning! Your mouthwash could cause you heart failure
Rating:
Note: 4.75 of 2 votes