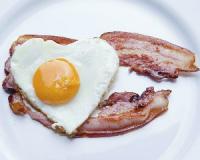 Peripheral artery disease affects close to 8.5 million people in the USA alone. The disease, which has to do with the narrowing of the arteries in the legs and elsewhere, poses a high death risk as it is.

But according to a new study conducted by Cleveland Clinic researchers, if you have peripheral artery disease and eat a diet rich in eggs and red meat, your risk of death is even higher!

The study, which was published online in the Journal of the American Heart Association, found that people with peripheral artery disease who eat a lot of eggs and red meat may have increased odds of dying early. Keep reading to find out why...

According to researchers from Cleveland Clinic in Ohio in the US, eating eggs and red meat is dangerous for people with narrowing arteries because of a digestive by-product that’s produced by your gut bacteria that breaks down eggs and meat products. The name of this by-product is trimethylamine N-oxide (or TMAO).

The researchers found that people with peripheral artery disease who had very high levels of TMAO were nearly three times more likely to die of the disease within the next five years, compared to people who had the lowest TMAO levels.

“These findings point to the potential for TMAO to help identify high-risk patients who likely need more aggressive and specific dietary and pharmacologic therapy,” reported lead researcher, Dr WH Wilson Tang, a professor of medicine at the clinic. Dr Tang added that while these findings don’t drove that high TMAO levels cause deaths, they certainly show an association.

“Vegetarians or vegans or those who eat a Mediterranean diet, however, have lower TMAO levels,” Dr Tang noted. So for those with high levels of TMAO, “more aggressive dietary counselling is warranted,” he said.