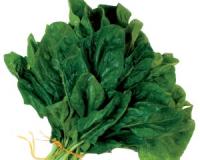 When you hear the word “spinach”, what's the first thing you think of? For me, it's the pipe-smoking cartoon sailor Popeye. He'd chow down a can of spinach for instant strength and muscles to fight villains. Do you remember him?

After watching that cartoon for most of my childhood, I was pretty disappointed when I eventually found out that eating a plate of this leafy greens doesn't actually cause your muscles to triple in size. But, this superfood still has numerous tricks up its sleeves…

#1: Spinach can help you control your appetite
In one study, researchers found that supplementing a meal with thylakoids (part of the cell system that gives spinach its green colour) increased feelings of satiety in overweight people.
Another study found that mice fed with thylakoid-enhanced diets had decreased fat mass and lower body weight than those who ate a thylakoid-free diet.
So, if you’re trying to drop a few kilos, try eating a side of spinach with every meal. It may just help you feel satisfied before you’re tempted to indulge in the bread basket or a sugar-loaded dessert!
#2: Spinach is chock-full of vitamins and minerals
Spinach contains a total of 15 different vitamins and minerals – that’s impressive! These nutrients are essential for pretty much every aspect of your health, offering vitamins A (in the form of carotenoids), B2, B6, C, E and K as well as folate, magnesium, manganese, copper and iron in every mouthful.
And that isn’t all – spinach also contains around 5.36 g of protein per cup when cooked. That’s right – it’s one of the most protein-rich vegetables out there!

***
Re-write your health for the rest of your life with two tablespoons  of Hemp Seed Oil a day
When you start adding Hemp Seed Oil to your daily diet, you start to see dramatic results.
Your joints no longer ache. Your blood sugar and blood pressure levels stabilise.
Your headaches disappear, even your immune system strengthens and your cancer
cells turn on themselves.
And this all in just two tablespoons of the oil a day.
Get your supply here… ***
#3: Spinach protects your heart
One study found that the high nitrate concentration contained in spinach (that was juiced in the study) increases the plasma nitrate and nitrate concentrations in the body. The result? Lowered blood pressure and reduced risk of heart disease.
Another study found that the flavonoid-rich leafy green enhances endothelial function, which is a marker of heart heath.
To keep your ticker beating strong, be sure to incorporate loads of spinach into your daily meals!
#4: Blending or juicing spinach may be the best way to consume it
Popeye may have greedily eaten his spinach straight from the can, but there are even healthier ways to enjoy this superfood. Without the risk of ingesting harmful bisphenol A, that is.
Research shows that liquiefying this leafy green in a blender of juicer releases he beta-carotene stored in cell membranes, which improves your nutrient absorption.
And there you have it – four surprising benefits of spinach. Seems Popeye was onto something after all!
Tags: spinach, spinach health benefits, superfood, leafy greens, appetite control, heart health, nutrients

The leafy green that's great for everything from appetite control to heart health
Rating:
Note: 5 of 1 vote