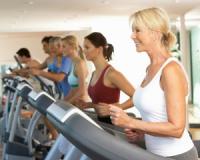 A recent study published in the online edition of the journal Neurology has uncovered the five healthy habits that can cut a woman's stroke risk in half.

While other studies have looked at single stroke risk factors, only a few have examined the combined effects of a healthy lifestyle on stroke risk, according to study author Susanna Larsson, a researcher at the Karolinska Institute in Sweden.

To reach their findings, Larsson’s team followed nearly 32,000 Swedish women with an average age of 60 for an average of 10 years. The women reported on their diet and lifestyle.

The researchers considered a healthy diet one within the top 50% of a food score that measured how often the women ate fruits, vegetables, low-fat dairy products and other healthy fare. Moderate alcohol intake was considered three to nine drinks a week. Women were classified as physically active if they walked or biked at least 40 minutes per day along with doing more vigorous exercise for at least one hour per week. Healthy weight was defined as having a body mass index below 25.

While 589 women reported all five of the healthy habits, about 1,500 had none. Most women had two or three.

During the follow-up period, 1,554 women suffered strokes. The researchers observed that the more healthy habits a woman practised, the less likely she was to have a stroke. They concluded that women who ate a healthy diet, drank alcohol moderately, never smoked, remained physically active and had a healthy body weight were 54% less likely to have a stroke than those with none of these factors.

“We observed that the risk of stroke decreased steadily with an increasing number of healthy lifestyle habits,” Larsson said.


It’s never too late to start being healthier!

Larsson said she encourages women who’ve reached midlife and need to get healthier, to do so. Because her study only included women, she said she can’t say if the findings apply to men, but that’s what she wants to find out next.

“We’ll examine, in a similar cohort of men, how large an impact a healthy lifestyle has on stroke risk in men,” Larsson said.

Practising these healthy habits can cut a woman's stroke risk in half
Rating:
Note: 3.75 of 2 votes