Nuts and seeds have a largely positive effect on cardiovascular disease 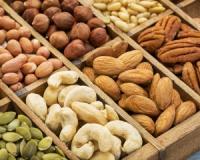 Getting protein intake from nuts and seeds rather than animal sources could help prevent cardiovascular disease, according to a new study published online in the International Journal of Epidemiology.

For their study, the team looked at five different dietary patterns and sources of protein, including meat, nuts and seeds, fruits and vegetables, grains, legumes and processed foods and their effect on cardiovascular disease. Keep reading for the full findings.

The study was conducted by a team of researchers from Loma Linda University School of Public Health in California and AgroParisTech and the Institut National de la Recherche Agronomique in Paris. In total, they looked at data from more than 81,337 participants and assessed their diets and protein consumption.

The team found no link between cardiovascular disease and fruits and vegetables, grains, legumes or processed foods, which suggests that the association found couldn’t be ascribed to any other source of nutrients included in the study.

A number of previous studies have suggested that it’s the bad fats in meat and the healthy fats in nuts and seeds, however, this new study suggests that protein could also play a role.

“While dietary fats are part of the story in affecting risk of cardiovascular disease, proteins may also have important and largely overlooked independent effects on risk,” said Gary Fraser, on of the study’s co-principal investigators.

Nuts and seeds have a largely positive effect on cardiovascular disease
Rating:
Note: 5 of 1 vote