Another reason to eat your veggies: Healthy blood vessels 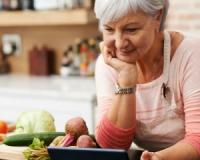 Your mother always told you to eat your veggies when you were younger. As it turns out, she was onto something: According to new Australian research, eating lots of vegetables can help older women keep their blood vessels healthy.

The study found that the greatest benefit came from cruciferous vegetables, including broccoli, cauliflower, Brussels sprouts and cabbage. It linked these strong-smelling veggies to less thickening of the carotid arteries, located in your neck. Keep reading to learn more.

To reach their findings, the study team looked at nearly 1,000 women aged 70 and up. The women filled out questionnaires about how often they ate vegetables, with responses ranging from never to three or more times a day. Types of vegetables included cruciferous vegetables, leafy greens, onions, leeks, shallots, garlic, beans and yellow, orange or red vegetables.

Using sonograms, the tam measured the thickness of each woman’s carotid arteries and the amount of plaque they contained. They found that the artery walls of women who ate the most vegetables were about 0.05 mm thinner than those who ate the least.

Lead researcher Lauren Blekkenhorst said the difference might be significant because a 0.1 mm decrease in carotid wall thickness was linked to a 10% to 18% lower risk of stroke and heart attack. Blekkenhorst is a research associate in the School of Medical and Health Sciences at the University of Western Australia.

On average, each additional 15 g of vegetables in a day was tied to a nearly 1% thinner carotid artery wall. Cruciferous vegetables appeared to offer the biggest benefits.

The team published their full findings in the Journal of the American Heart Association.
Tags: heart health

Another reason to eat your veggies: Healthy blood vessels
Rating:
Note: 5 of 1 vote