A single milkshake can kick-start the path to heart attack! 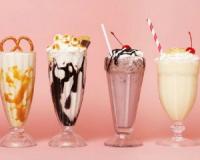 You know that milkshakes are high in fat and sugar, and therefore bad for your waistline. What you probably didn't know is that indulging in this delicious drink can also set the stage for heart attack. That's according to a new study published in the journal Laboratory Investigation.

The study, conducted by researchers at the Medical College of Georgia at Augusta University in the United States, found that a single milkshake could almost instantly turn healthy red blood cells into small spiky cells that can trigger heart disease.

The study team say that their discovery may help explain reports of heart attacks and deaths straight after eating high-fat meals. Keep reading for the full findings.

For their study, the team looked at healthy men who ate a meal containing the same number of calories. One group drank milkshakes that contained about 90 g of fat and 1,000 calories, and another group ate three big bowls of sugar-coated cereal flakes with non-fat milk that also contained 1,000 calories.

While the cereal meal also contained too much sugar and too many calories, which scientists don’t recommend as part of a healthy diet, those who ate the cereal didn’t have the same dangerous changes to their blood, red blood cells and blood vessels as those who drank the milkshakes.

The team found that only four hours after drinking a milkshake made with whole milk, heavy whipping cream and ice cream, the blood vessels of healthy young men were less able to relax. What’s more, the high-fat drink triggered an immune response similar to one caused by an infection.


Is drinking milkshakes worth your life?

Because the participants in the study were healthy, the team said the effects of drinking the milkshakes were probably temporary. However, they warned that the toll accumulates from this type of unhealthy eating that’s similar to a lot of restaurant fare.

“We see this hopefully as a public service to get people to think twice about eating this way,” said co-author Dr Neal L Weintraub, a practicing cardiologist who has patients with heart disease who continue to eat high-fat diets.

Dr Weintraub asks you to think twice: “Is this food worth your life?”
Tags: heart attack

A single milkshake can kick-start the path to heart attack!
Rating:
Note: 5 of 1 vote