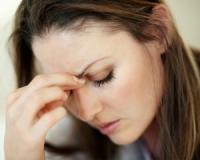 Who would've guessed that your digestive system may be behind your severe headaches?

According to a new study published in the journal systems - a journal of the American Society for Microbiology - people who suffer from migraines have more nitrate-reducing microbes, or germs, in their mouths and digestive systems.

Read on to find out more about the link between your microbiome and migraines...

To come to this conclusion, researchers from the University of California in San Diego in the USA analysed data from the American Gut Project, which included more than 170 oral samples and almost 2,000 faecal samples.
The researchers found that severe headache sufferers had significantly higher amounts of nitrate-reducing microbes in their mouths and digestive systems than those who didn’t suffer migraines.
Nitrates are found in a number of foods, from leafy green vegetables to processed meats. They’re also found in some medicines.
“There’s this idea out there that certain foods trigger migraines – chocolate, wine, and especially foods containing nitrates,” said lead study author Antonio Gonzalez.


************Related Advertisement************ You have nothing to lose except your digestion problems when you try Nutri-Digestive Wellness. Do you suffer from cramps, bloating, gas, constipation, diarrhea or other embarrassing digestive problems? Repair your digestive system today and you could restore your health completely! Click here to find out more... ***************************************
“We thought that perhaps there was a connection between someone’s microbiome and what they were eating,” Gonzalez added.
Most of the 38 million Americans who suffer from severe headaches have noted a link between consuming nitrates and migraines, said Gonzalez’s team in a university news release.

While Gonzalez’s team found an association between nitrate-reducing microbes and migraines, they weren’t able to prove a cause-and-effect relationship.
Because of this, they noted that further research on the topic is necessary to better understand the link between nitrate-reducing microbes and migraines.
Gonzalez’s team said that they hope the results of their study lead to new and improved migraine treatments.
Tags: digestion, digestive health, severe headaches, migraines, causes of migraines, gut health, gut bacteria, microbes, microbiome

Why your digestive system may be to blame for your severe headaches
Rating:
Note: 3.17 of 3 votes