Vegans and vegetarians are more likely to have depression - here's why 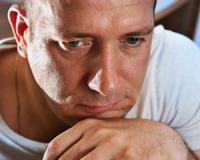 vegetarian lifestyles. Not only do plant-based folks have lower rates of diabetes, high blood pressure and heart disease, research suggests that they may even have an easier time losing weight and live longer.

But it's not all good news - according to a recent Bristol University study, vegans and vegetarians are more likely to be depressed than carnivores. The reason? Study authors hypothesise that it's due to the lack of omega-3 fatty acids (found in fatty fish like salmon and tuna) and vitamin B12 (the best source being red meat).

A body of research has tied deficiencies in these nutrients to a higher risk of depression. Read on for more...

To reach their findings, the study authors reviewed survey data from 9,700 British men, 350 of who were vegans or vegetarians. The men filled out questionnaires about their daily diets and typical moods, among other things.

The authors found that the plant-based eaters were almost twice as likely to suffer from depression than the meat-eaters. These results stayed the same even after controlling for lifestyle factors that could influence happiness.


Even though the study only looked at men, women should still take note!

Past studies have found that female vegetarians have a higher risk of depression and anxiety than their meat-eating counterparts. If you are a plant-based eater, this doesn’t mean you have to turn back on your preferred way of eating to stave off depression. You can make sure you get enough depression-fighting nutrients in your diet by taking fish oil and vitamin B12 in supplement form daily.
Tags: depression

Vegans and vegetarians are more likely to have depression - here's why
Rating:
Note: 5 of 1 vote