This popular diet could reduce your risk of developing depression 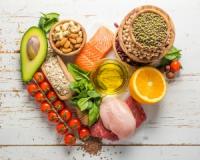 You've heard of the DASH (Dietary Approaches to Stop Hypertension) diet and know that it was developed to lower blood pressure without medication. As it turns out, this diet could also help reduce your risk of developing depression, a study by researchers at Rush University Medical Center in the United States has found.

The DASH diet is high in fruits, vegetables and whole grains with a regular intake of nuts and beans, lean meats, fish and poultry and fat-free or low-fat dairy products. If you've been thinking of switching to it, here's why you should - not only for your heart health, but your mental and emotional health, too!

The DASH diet could reduce your risk of depression, according to research

To reach their findings, the researchers followed 964 people with an average age of 81 for an average of six-and-a-half years. They assessed the participants annually for symptoms of depression, such as feeling hopeless about the future or being bothered by things that usually didn’t affect them.

In addition, the participants completed questionnaires on their diet so the researchers could assess how closely they followed diets such as the DASH, Mediterranean or the traditional Western diets.


And traditional Western diets boosts your risk of depression…

In contrast, the team found that participants who followed a Western diet most closely, which is high in red meats and saturated fats and low in fruits and vegetables, were most likely to develop depression.

“Depression is common in older adults and more frequent in people with memory problems, vascular risk factors such as high blood pressure or high cholesterol, or people who’ve had a stroke. Making a lifestyle change such as changing your diet is often preferred over taking medications, so we wanted to see if diet could be an effective way to reduce the risk of depression,” said study author Dr Laurel Cherian.
Tags: depression

This popular diet could reduce your risk of developing depression
Rating:
Note: 5 of 1 vote