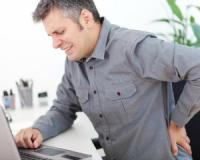 Do you suffer from persistent pain? As in pain that continues day in and day out? Well, then, we've got some bad news for you…

According to a study published in the journal JAMA Internal Medicine, persistent pain may increase your risk or mental decline and dementia. Keep reading for the full findings.

The researchers looked at information on more than 10,000 people, all of whom were 60 and older. The researchers found that the participants who had moderate or severe chronic pain in both 1998 and 2000 had more than a 9% faster decline on memory tests over the next 10 years compared to those who didn’t have pain.

This reduction in memory would probably be enough to affect the participants’ ability to do things such as keep track of their medications and manage their finances, according to the researchers. Furthermore, they found that the participants with chronic pain also had a small but significantly increased of developing dementia.

“Elderly people need to maintain their cognition to stay independent. Up to one in three older people suffer from chronic pain, so understanding the relationship between pain and cognitive decline is an important first step toward finding ways to help this population,” study firth author Dr Elizabeth Whitlock, a postdoctoral fellow in the department of anaesthesia and perioperative care at the University of California in the United States, said in a news release.

These findings suggest that chronic pain may be related to changes in the brain that increase your risk of mental decline and dementia. They also point to new ways to protect against age-related mental decline, the researchers said.

In conclusion, the researchers emphasised that while their study showed a link between chronic pain and memory problems, it wasn’t designed to prove a cause-and-effect relationship.
Tags: chronic pain