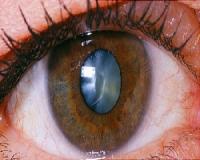 Your eyes have two natural enemies: Oxygen free radicals and ultraviolet light. The sunlight wavelength, ultraviolet-beta radiation (UVB), can cause cataracts and the free radicals damage cell proteins that protect the retina. But there is a way to reduce the risk of cataracts naturally.

Take a look below...


Reduce the risk of cataracts naturally...

In a study published in the Journal of Nutrition, researchers from the Ohio State University noted that the only dietary carotenoids present in the lens of the eye are lutein and zeaxanthin.

They then applied lutein, zeaxanthin and vitamin E in different concentrations to human eye cells to test for their protective effects. The cells were then exposed to UVB light for several seconds.

At the end of the study, the researchers found vitamin E minimised damage by about 30% and lutein and zeaxanthin reduced damage by more than 50% at concentrations far less than those used for vitamin E.

Other studies have also shown that eating  a sufficient amount of nutrients could protect the lens and reduce the risk of developing age-related cataracts.

Wipe out cancer with a natural compound?

In a study consisting of 17 cancer patients, their powerful immune responses doubled in just 2 weeks of taking these cancer-fighting compounds… and after 6 weeks, their immune activity increased up to 1,000%!

For starters, it has strong antioxidant properties and can minimise cell mutation, which as we know can result in cancer.

It also strengthens the immune system to kill cancer cells… Plus, it increases the effectiveness of chemo and radiation, and reduce their side-effects.

This compound is found in medicinal mushrooms. And, in Japan, it’s given to just about every cancer patient in major hospitals. That’s one of the reasons so few Japanese people die from cancer…

Find out more about it here...

Help prevent cataracts through your diet...

And then there’s also vitamin C. A Tufts University study found that women who took vitamin C supplements every day for more than a decade were 64% less likely to show signs that leads to cataracts, compared to those who didn't take vitamin C.

Cataract warning signs to look out for:

It’s important to be aware of warning signs for cataracts so you can treat them. They are:

* Cloudy or blurred vision
* Frequent changes in eyeglass or contact lens prescription
* A sense that colours aren’t as vivid as they should be
* Excessive glare from bright lights
* Poor night vision
* Double images or distorted images
* Cataracts tend to develop slowly and cause no pain. So to ensure you detect it early, if you’re over 65 year old, get your eyes examined at least once a year
Tags: stop cataracts naturally with these three nutrients...