Slash your risk of multiple sclerosis by 45% by eating fish regularly! 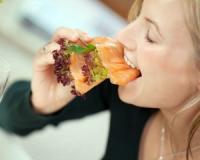 Multiple sclerosis, an autoimmune disease in which the insulating covers of nerve cells in the brain and spinal cord are damaged, resulting in a range of signs and symptoms, including physical, mental and sometimes psychiatric, affects 2.5 million people worldwide.

If you have thyroid disease, type 1 diabetes or inflammatory bowel disease, you have a slightly higher risk of developing multiple sclerosis. But here's some good news: You can lower your risk by simply eating fish regularly, according to a new study funded by the US National Institute of Neurological Disorders and Stroke.

In multiple sclerosis, the immune system mistakenly attacks and destroys myelin, a fatty substance that covers and protects the nerves, hence a loss of myelin is one of the main signs of the disease.

They are, however, at increased risk of developing multiple sclerosis compared to the general population, says the National Multiple Sclerosis Society.

The study included more than 1,100 people from Southern California with an average age of 36 years old. Half had been diagnosed with early multiple sclerosis or with clinically isolated syndrome.

What’s more, the study also included an analysis of 13 genetic variations in a human gene cluster known to regulate fatty acid levels. Two of the 13 variations were associated with a lower risk of multiple sclerosis, no matter what the fish consumption was. This suggests that some people may have a genetic advantage in regulating fatty acid levels, according to the researchers.

Slash your risk of multiple sclerosis by 45% by eating fish regularly!
Rating:
Note: 5 of 1 vote