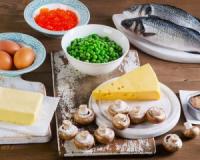 People with lupus, a systemic autoimmune disease that occurs when your body's immune system attacks your own tissues and organ, may fare better if they consume enough omega3 fatty acids and vitamin D in their diet, preliminary research suggests.

In separate studies, researchers tied consumption of these two nutrients - or a lack thereof - to lupus flares and complications.

More specifically, these associated optimal consumption of omega-3s - mainly found in oily fish - to less severe symptom flare-ups and better sleep quality, and low blood levels of vitamin D to a higher risk of kidney damage. Read on for more.

In systematic lupus erythematous (SLE), your immune system mistakenly produces antibodies against your body’s own tissue. This attack can have severe effects, damaging your brain, heart, lungs, kidneys, joints and skin.

According to the Lupus Foundation of America, at least 1.5 million Americans have SLE. It’s most common in women and usually strikes them in their 20s or 30s.

The studies looked into whether certain nutrients play a role in the risk of lupus symptoms and complications. Both studies were reported at the annual meeting of the American College of Rheumatology in San Diego.

The omega-3 fatty acids study involved 456 SLE patients who completed a detailed survey. The researchers found that the more omega-3 fats people consumed, the better their sleep quality. They also found that eating plenty omega-3-rich foods while tempering intake of omega-6 fats went hand-in-hand with scores on a measure of lupus ‘disease activity’.

The vitamin D study involved nearly 1,400 SLE patients who had their blood levels of the nutrient measured. On average, the researchers found that patients with low vitamin D levels had a 66% higher risk of severe kidney damage compared to those with normal levels.

The researchers concluded that while many rheumatologists already screen lupus patients for low levels of vitamin D because it’s a common problem for people with the condition, you should ask your doctor about it if you haven’t been screened. They added that paying attention to your diet, which includes consuming enough omega-3 fatty acids, is generally a wise move.