Is it IBS, or something more serious like colorectal or ovarian cancer? 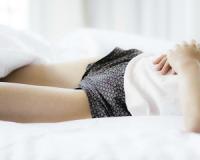 If you suffer from persistent bloating, cramps and irregular toilet habits, you may have concluded that you have irritable bowel syndrome (IBS).

But here's the thing: sometimes IBS symptoms stop being simply IBS and turn into something much more serious, such as colorectal or ovarian cancer.

Read on for four medical issues that your IBS symptoms could be trying to make you aware of, according to Dr Lisa Das, a consultant gastroenterologist at Bart's and the London NHS Trust.

#1: Inflammatory bowel disease
Inflammatory bowel disease (IBD) is often istaken for IBS – but there’s actually a big difference, Dr Das points out. “IBS is a syndrome, meaning it’s a collection of symptoms, not a disorder or a disease process. IBD, on the other hand, is a disease that has risks long term (like developing cancer) and therefore needs treatment. IBS, while it can be difficult to manage, doesn’t have risks long term,” she explains.

Furthermore, IBD consists of conditions that involve inflammation of the gut, such as Crohn’s disease or ulcerative colitis, Dr Das says.

What if your digestive issues like bloating, cramps and gas aren’t IBS?

When you see a doctor about your digestive issues like gas, bloating and gut pain, you may be diagnosed with irritable bowel syndrome (IBS).

But what if your symptoms aren’t being caused by IBS?

Find out why following a treatment for IBS may not be doing you any good and what tests you need to ask your doctor for to get real answers.

#2: Coeliac disease
Coeliac disease is a digestion condition in which patients have a severe reaction to gluten, which makes them completely unable to consume any foods that contain it. Dr Das confirms that celiac disease has exactly the same symptoms as IBS.

That said, statistics show that only 1% of the American population suffers from coeliac disease and that it’s most common in people with an autoimmune condition such as an underactive thyroid, or with a family history of the celiac disease. A simple blood test followed up by an endoscopy with a biopsy will help rule out coeliac disease.

#3: Ovarian cancer
According to Dr Das, “All GPs know that if you’ve got a young lady with persistent bloating, it’s worth doing an ultrasound to exclude an ovarian issue.” Does that mean that all young women who bloat should be very concerned? Of course not. Statistically, you’re much more likely not to have ovarian cancer than to have it.

#4: Colorectal cancer
“Alarmingly, research suggests the risk of bowel cancer and rectal cancer is actually increasing in the younger generation,” Dr Das says. She suggests that this increase may be due to a reduction in mortality related to this specific cancer for people over 50 due to bowel cancer screening and colonoscopies.

Dr Das adds that doctors might not have taken young patients complaining of unusual bowel behaviour seriously because historically, younger people haven’t been considered at high risk of colorectal cancer. But studies show that someone born in the 1990s is four times more likely to develop colorectal cancer compared to someone born in the 1950s now. Further research is needed to find out why this is.

While symptoms of IBS are similar to those of colorectal cancer, Dr Das clears up that it “could be anything, even just abdominal pain.” If you’re really concerned, push your doctor to investigate further.

Is it IBS, or something more serious like colorectal or ovarian cancer?
Rating:
Note: 4.33 of 3 votes