How liquorice root is beneficial to your stomach, kidneys, adrenals and more 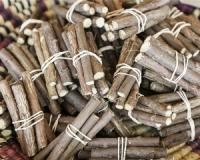 For many centuries, people have been using liquorice root as a medicinal plants. In the Roman Empire and ancient Greece, for example, people used it to treat the common cold and asthma.

In Nordic countries, pharmacies began selling it during the 16th century as a cure for stomach problems. Liquorice root was still available in pharmacies there up until the 1970s.

What's more, liquorice root was even more commonly used as a medicinal plant in ancient China… and its use continues today!

#1: Mouth
Liquorice root has super anti-inflammatory properties and can therefore some say that it can help prevent cavities if you chew it. It’s no wonder that some toothpastes are now being flavoured with liquorice!

#2: Throat
Liquorice root has expectorant and inflammation-fighting effects. Among other things it contains sapotins, a soap-like substance that lowers the surface tension in your mucus membranes and activate the reflexes in your bronchus. In turn, this makes it easier for your throat to expel mucus.

#3: Stomach
For centuries, people have sworn by liquorice root as an upset stomach remedy. This is because it contains an abundance of flavonoids, which are proven to suppress the helicobacter pylori bacteria in upset stomachs. It’s said that eating liquorice on the regular may also have a laxative effect.

#4: Kidneys and adrenals
According to science, liquorice root has a very stimulating effect on your kidneys and adrenal glands, keeping these organs in a healthy, happy state and functioning optimally.

Do you know of any other medicinal uses for liquorice root?

How liquorice root is beneficial to your stomach, kidneys, adrenals and more
Rating:
Note: 5 of 1 vote