How bees could put an end to a swollen prostate... 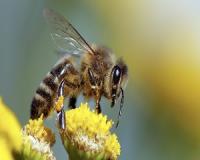 He'd found no relief from doctors.

The patient decided to take bee pollen as a general tonic, to build up his strength for scheduled prostate surgery.

Very shortly after he started taking the bee-pollen doses, the man noticed that his prostatitis was gone.

His urologist canceled the surgery.

Read more about how bee pollen could put an end to your swollen prostate below...


Bee pollen is backed by science

Researchers at the Nagasaki University School of Medicine in Japan and the University of Lund in Sweden did independent studies of bee pollen and prostate problems.

Both reported marked reduction in prostatic swelling and inflammation, even in severe cases of prostatitis.

Neither study reported any adverse side effects.

Studies at Yugoslavia's University of Sarajevo showed that bee-pollen therapy aids in cases of prostatitis and impotency, and may also treat some cases of male infertility.

Men: This Comprehensive Natural Solution Fortifies Your Bladder Without Side-Effects!

It’s fascinating how the bladder works. As it fills up, the bladder muscles are relaxed. But when you go to the loo to pee, the muscles contract, and when they do, they pressurise the urine through the urethra and out of your body.

It’s like when you want to empty your plastic water bottle out faster – you squeeze it and the stream coming out of the bottle becomes stronger and more powerful.

But if you suffer from a swelling prostate, chances are your bladder health could also be affected...

You see, as you get older, your bladder muscles become weaker, and your bladder walls become stiffer and more rigid as they lose their elasticity – making urinating more difficult.

Not only this, experts speculate that many men who suffer from a swelling prostate also have an overactive bladder. When the urethra is squeezed by a swollen prostate, the bladder has to work harder to push the urine out. Over time, this can further weaken the bladder.

The result is a common bladder control problem, described as a frequent and intense urge to urinate.

But, when you support your bladder health with the right nutrients, these issues go away…

Why does it work so well, and where you can get bee pollen...

Bee pollen contains more than 5,000 enzymes and coenzymes - far more than any other food.

Its unique combination of vitamins, minerals, amino acids, hormones, carbohydrates, and fatty acids, all in just the right proportions, is what makes bee pollen so effective.

Look for granules or capsules made from High Desert sources. This type of pollen is made from many different types of plants indigenous to unspoiled areas. It is not damaged through heat-processing and is less affected by industrial pollution.

Read the label but to be fully effective, at first you may need up to eight capsules per day, two with each meal and two at bedtime.

In less than a month, you could put an end to your swollen prostate, thanks to bee pollen!

Tags: how bees could put an end to a swollen prostate...