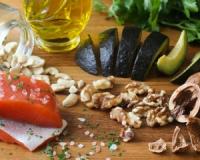 You'd never guess it, but according to David Mischoulon, MD, a professor of psychiatry at Harvard Medical School, most of us are deficient in fat. But Dr Mischoulon isn't talking about just any fat - rather, he's talking about omega-3 fatty acids, which are found in fish, flaxseed and some nuts.

SAD is a mood disorder characterised by depression that occurs at the same time every year.
According to Dr Mischoulon, statistics reveal that populations like Iceland and Japan that consume more fatty fish, such as salmon, mackerel and trout, have lower rates of SAD.
Studies suggest that omega-3s can treat postpartum depression
Studies haven’t confirmed it yet, but a growing body of research suggests that omega-3s can treat postpartum depression – depression that occurs after childbirth – says Dr Mischoulon.
So far, research has been able to prove that women who develop postpartum depression tend to be deficient in omega-3. Furthermore, because taking medication like antidepressants can be foetus and child (through breastfeeding), doctors think omega-3s may be an excellent preventive treatment during pregnancy.
***

Are you walking around with a heart that's
ageing faster than your body?
If your heart is older than your chronological age, you could be at risk of
a heart attack or stroke.
But fear not, your heart isn’t doomed to early retirement. Because this
one nutrient your body doesn’t produce could help turn back the clock of
your ageing heart.
It’s a simple, yet long exploited, secret the Japanese have been using for
thousands of years…

While the researchers behind these studies don’t suggest that people with severe depression or bipolar disorder use omega-3s as a first-line treatment, the latest research confirms that people with mild depression can use omega-3s as a natural depression remedy or an adjuvant to medication.
Dr Mischoulon explains that omega-3 supplements have a different effect on the brain to antidepressants. Therefore, incorporating omega-3 supplements into your antidepressant regimen is a way to attack the brain disorder from a different front.

How to pack more omega-3s in your diet