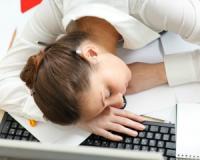 Chronic stress and fatigue are widespread individual problems in today's modern world and re fast becoming a social problem, too.

While there are many natural remedies that can help you get your stress levels and fatigue under control, there's one you probably haven't heard of yet that works better than any of the rest - ETAS, an enzyme-treated asparagus extract that's taking the health world by storm.

Don't believe it? Well, there's research to prove it. Keep reading to learn more about chronic stress and fatigue, and how ETAS can help get these conditions under control.

Chronic stress is linked to a host of disorders, from sleep disturbances to depression...

A body of research suggests that chronic stress goes hand in hand with various disorders, including sleep disturbances, neurological symptoms and depression.

Stress-related sleep disorders result in increases in biochemical indices like serum and salivary cortisol and chronographanin A. That’s why scientists have developed ETAS – a functional material produced from asparagus stem – to reduce chronic stress and the harmful knock-on effects.

One study published in the Journal of Nutritional Science and Vitaminology in 2014 titled ‘The Effects of Enzyme-Treated Asparagus Extract on Heat Shock Protein 70, Stress Indices, and Sleep in Healthy Adult Men’ supports the stress-reducing effects of ETAS. The study involved a group of healthy men between ages 25 and 56.

For the randomised, double-blind, placebo-controlled human interventional clinical trial, researchers analysed the effect of ETAS on the expression of HSP70 mRNA in blood and the autonomic nervous system. They divided the men into a placebo group and an ETAS group. The men ingested three capsules containing either placebo or ETAS (50 mg of ETAS per capsule, three capsules per day) at the same time after dinner for one week.

The researchers found that the men in both groups had higher expression levels of HSP70 mRNA after the one-week period. However, the expression level (% of base line) was greatly enhanced in the ETAS group compared with the placebo.

Get ready to say bye-bye to chronic stress and fatigue with ETAS
Rating:
Note: 4.75 of 2 votes