Eat mushrooms to help slash your risk of prostate cancer! 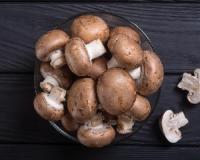 It may seem silly to think that a humble vegetable, like a mushroom, could help prevent something as cruel as cancer...

But when you stop seeing food as something you just eat and start appreciting the different health nutrients in certain foods - you could benefit from them...

Certain foods have been used for thousands of years for their medicinal effects... Like mushrooms for example.

Find out below which nutrient in mushrooms has been scientifically proven to help prevent prostate cancer...

The study, published in the International Journal of Cancer, reviewed data on 36,000 men over 13 years.

The researchers found a surprising trend in the data - the men who ate mushrooms had less risk of developing prostate cancer.

The mushrooms were more effective in older men - and they're the ones who are most prone to prostate cancer - so the researchers knew the protective effects are likely to be of an antioxidant nature.

Find out more below...

Wouldn’t it be great to go to the bathroom ONCE before you go to bed – then sleep the whole night through?

Wouldn’t it be fantastic to not have to look for the toilet eveeeerywhere you go?

And not have to subject yourself to another dirty, disgusting public toilet…

That’s the whole idea behind the formula I want to introduce to you right now. It’s called ULTIMATE PROSTATE DEFENCE PLUS, and it’s guaranteed to make your life better -- or your money back.

It’s that simple, friend. If it doesn’t work, you don’t pay for it.

But I’m getting ahead of myself.

Let me quickly explain a little bit more about the “5 pillars of a perfect prostate” – and how they could quickly turn your life around.

Experts have found that mushrooms contain a nutrient called L-Ergothioneine. It's an antioxidant with powerful anti-inflammatory effects.

Now, chronic inflammation is known to cause cancer, so this is how this medicinal food could protect your health.

And what could be better than eating a delicious food for its medicinal values instead of swallowing more pills?

Go on, add mushrooms to your weekly grocery list and get creative with your meals - it's good for you!