Do you get migraines? They could be a sign of something more serious... 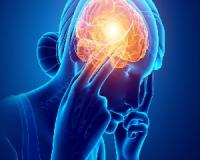 Dr Lipton, a professor and vice chair of neurology at Albert Einstein College of Medicine in the United States identified links between migraines and other - more serious health problems.

#1: Depression
Occasional migraines could double your risk of developing depression. If you have chronic migraines – that’s 15 or more days per month – your risk doubles again. In some cases, depression comes first instead of as a result of migraines.

This suggests that migraines and depression have something in common like genes, neurology - or both, according to Dr Lipton.

#2 Stroke
A number of studies have found a link between migraines with aura – the sensory symptoms that sometimes precede a migraine attack – and strokes caused by blood clots.

If you have migraines with aura, you have approximately double the risk of a stroke than the general population, says Dr Lipton. However, that risk is pretty small overall. “Migraine, particularly with aura, is largely a disease of younger women and women are at a lower risk of stroke than men. Even though the risk doubles, it’s still low,” Dr Lipton says.

#3: Epilepsy
Like migraines, the seizure disorder epilepsy can involve both mood changes and sensory disturbances. Having one of these conditions could double your risk of the other, according to Dr Lipton – but either can come first.

“They’re both disorders of brain excitability, where the brain is likely to react to environmental stimuli, to sleep deprivation. Some of the specific genetic causes of migraine also cause epilepsy,” Dr Lipton explains.

#4: Anxiety
People who suffer with chronic migraines are ore likely to have an anxiety disorder. About 50% of people with migraines also have anxiety, according to the American Migraine Foundation.

#5: Heart attack
People who get migraines, especially those with aura, also have a higher risk of heart disease and heart attacks. One study also found that migraine sufferers were more likely to suffer from high blood pressure and diabetes.

While this may not be good news - it's wise to be aware of the additional health risks - this way you know taht if you experience other signs, you need to take them seriously. It's also important to go for your checkups and to ensure you get proper treatment for health conditions.
Tags: do you get migraines? they could be a sign of something more serious...

Do you get migraines? They could be a sign of something more serious...
Rating:
Note: 5 of 1 vote