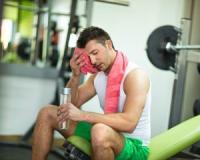 It goes without saying that if you give up on your exercise programme, you'll be putting your fitness at risk. Well, that's not all - according to new research, stopping your exercise also makes you vulnerable to depression!

The review of studies, which included 152 adults who stopped exercising after doing at least 30 minutes of exercise, three times a week, for a minimum of three months, found a strong association between stopping exercise and developing depressive symptoms.

Read on for the full findings that will appear in the July issue of the Journal of Affective Disorders.

Study senior author Bernhard Baune, head of psychiatry at the University of Adelaide in Australia, said that in some cases, ceasing 30 minutes of exercises, three times a week, induced significant increases in depressive symptoms in just three days.

Baune added that other studies have showed that people’s depressive symptoms increased after the first one or two weeks, which is also quite soon after stopping their exercise.

“This suggests some kind of novel effect in these cases, although we should add some caution here, as the number of people included in the studies we examined was small. Such findings would need to be replicated in additional trials,” Baune said.

While a large number of studies have suggested that exercising regularly can reduce and treat depression, researchers haven’t paid much attention to the reverse relationship, Baune pointed out.

While Baune’s study didn’t prove that stopping exercise actually causes depression, it did show an association. “For now, it’s important that people understand the potential impact on their mental well-being when they suddenly cease regular exercise,” Baune concluded.
Tags: depression

Stopping exercise might lead to depression...
Rating:
Note: 5 of 1 vote