Exercising throughout life is the secret to slowing down ageing 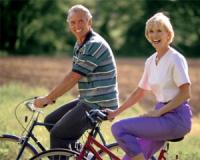 What you probably didn't know is that keeping active throughout life could also help keep your body younger and healthier as you age. This is according to new UK research published online in the journal Aging Cell. Keep reading for more.

Study shows that a lifetime of exercise slows down ageing

The study was conducted by researchers at the University of Birmingham and King’s College London, who set out to look at if a lifetime of exercise had slowed down ageing in a group of older adult participants.

------------Recommended Product ------------ This discovery finally lets you unlock the secret to TRUE ageless beauty Researchers have just revealed promising research on what may be heralded as the "missing link" in beauty science... A single nutrient that has the power to tap into the process inside the body that determines how fast - and how well - you age. Now, armed with this final coveted piece of information, we've developed a simple but extraordinarily powerful way to stop fading beauty before it's too late. This innovation has the potential to keep you looking fresh and flawless no matter how many times you've celebrated your "29th" birthday. And, in what may be the most stunning part of all, this youth-restoring breakthrough goes to work while you sleep. Get the exclusive inside scoop on how it may now be possible to get gorgeous while you sleep... -----------------------------------------------------

The team found that unlike those in the sedentary group, those in the cycling group didn’t experience loss of muscle mass and strength, which is often believed to be a normal part of the ageing process. What’s more, their body fat and cholesterol levels hadn’t increased with age, and the men’s testosterone levels had also remained high rather than declined with age. This suggests that the men may have avoided so-called male menopause.


Exercise also has an anti-ageing effect on the immune system…

Even more surprisingly, the team found that exercise had an anti-ageing effect on the immune system of the cyclists, as well as their muscles. The thymus, an organ that makes immune cells called T cells, start to shrink and makes less T cells from the age of 20. However, the team found that the cyclists’ thymuses were making as many T cells as those of a young person.

“We hope that these findings prevent the danger that, as a society, we accept that old age and disease are normal bedfellows and that the third age of man is something to be endured and not enjoyed,” said Dr Niharika Arora Duggal from the University of Birmingham.
Tags: ageing

Exercising throughout life is the secret to slowing down ageing
Rating:
Note: 5 of 1 vote