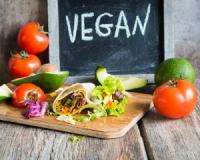 It's widely known that following a vegan diet, which is purely plant-based and consists of lots of vegetables, fruit and whole grains, is associated with lower risk of stroke and diabetes.

According to a new study published online in the journal PLoS Medicine, vegans are at lower risk of type 2 diabetes, a progressive condition in which your body becomes resistant to the normal effects of insulin and gradually loses the capacity to produce enough insulin in your pancreas. Here's why...

For the study, study lead author Ambika Satija and his team of researchers looked at information from more than 200,000 Americans. Each subject completed a series of questionnaires about their lifestyle, diet, medical history and current health status. Researchers collected this information over a period of 20 years.

Satija and his team found that people who closely followed a vegan or plant-based diet low in animal-based foods were 20% less likely to develop type 2 diabetes compared to those who didn’t.

What’s more, the researchers found that a healthy version of a vegan diet, rich in vegetables, fruits, whole grains, nuts and legumes, lowered the subjects’ risk of type 2 diabetes by 34%.

On the flip side, they found that people who ate less healthy foods, although still plant-based foods, were 16% more likely to develop type 2 diabetes. Researchers said that an unhealthy plant-based diet would be one rich in potatoes, sugar-sweetened beverages and refined grains.

Satija, a postdoctoral fellow at the Harvard School of Public Health in Boston in the US, reported, “This study highlights that even moderate dietary changes in the direction of a healthful plant-based diet can play a significant role in the prevention of type 2 diabetes.”

Vegans are up to 34% less likely to develop type 2 diabetes
Rating:
Note: 5 of 1 vote