Slash your risk of type 2 diabetes by consuming more antioxidants 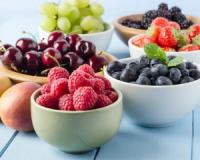 Eating more antioxidant-rich foods can help lower your risk of type 2 diabetes, according to a new study published in Diabetologia, the journal of the European Association for the Study of Diabetes.

This effect is contributed by fruit, vegetables, tea and other hot beverages as well as moderate consumption of alcohol. Keep reading for the full findings…

This study is the first to show that a diet rich in antioxidants can help lower your risk of type 2 diabetes. The team behind the study said they suspected that there may be a link on the basis of past research that’s shown that certain antioxidants are associated with a reduction in type 2 diabetes risk. These antioxidants include vitamins C and E, lycopene and flavonoids.

However, these studies only looked at isolated antioxidants rather than a total antioxidant capacity of the diet. For this reason, the researchers behind the new study wanted to verify whether overall diet, according to its antioxidant capacity, is associated with a lower type 2 diabetes risk.

To reach their findings, the researchers used data from the E3N cohort comprising French women recruited from 1990, then aged between 40 and 65 years. They followed the 64,223 women from 1993 to 2008 and noted that they were all free from diabetes and cardiovascular disease at the time of inclusion in the study.

The researchers then analysed the associations between this score and the risk of type 2 diabetes occurrence during the follow-up period. They found that type 2 diabetes risk diminished with increased antioxidant consumption up to a level of 15 mmol per day, above which the effect reached a plateau.

The team noted that the best antioxidant-rich foods to add to your diet to slash your type 2 diabetes risk are blueberries, strawberries, dark chocolate, tea, walnuts, hazelnuts and prunes.
Tags: type 2 diabetes