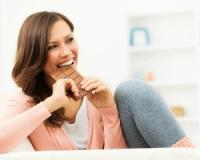 It may sound crazy enough to laugh off, but you can prevent and treat type 2 diabetes by eating chocolate. This goes according to a new study published in the Journal of Nutritional Biochemistry.

According to the researchers behind the study, certain compounds found in cocoa help your body release more insulin - the hormone that manages the blood sugar that reaches unhealthy levels in type 2 diabetes - and respond to increased blood glucose better.

Of course, there's a catch. So before you go stock up on sugar-rich chocolate bars, read on for the full scoop!

When you have type 2 diabetes, your body either doesn’t produce enough insulin or process blood sugar properly due to the failure of beta cells, whose job it is to produce insulin. According to this new study, beta cells work better and remain stronger with an increased presence of compounds that are naturally found in cocoa known as epicatechin monomers.

“You probably have to eat a lot of cocoa, and you probably don’t want it to have a lot of sugar in it,” said Jeffery Tessem, study author and professor of nutrition, dietetics and food science at Brigham Young University (BYU) in the United States. “It’s the compound in cocoa you’re after,” he added.

To arrive at these conclusions, collaborators at Virginia Tech in the United States first fed the cocoa compound to animals on a high-fat diet. They found that the compound reduced the level of obesity in the animals and increased their ability to deal with high blood glucose levels.

The BYU then dove in and analysed what was happening at a cellular level – specifically, a beta cell level. They discovered that cocoa compounds named epicatechin monomers boost beta cells’ ability to secrete insulin.

“What happens is it’s protecting the cells, it's increasing their ability to deal with oxidative stress,” explained Tessem. “The epicatechin monomers are making the mitochondria in the beta cells stronger, which produces more ATP (a cell’s natural energy source), which then results in more insulin being released.”

But this doesn’t mean you should go and indulge in sugar-rich chocolate bars. Instead, researchers believe the starting point is to seek out ways to take the compound out of cocoa, make more of it and then use it as a potential treatment for type 2 diabetes patients.
Tags: type 2 diabetes