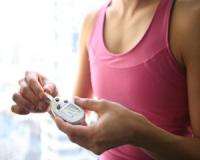 Women with polycystic ovary syndrome (PCOS) have a higher risk of developing type 2 diabetes and are diagnosed with the condition at an earlier age, a new study has found.

This is the first time research has found a link between PCOS and type 2 diabetes. Keep reading for the full findings, as published in the Endocrine Society's Journal of Clinical Endocrinology & Metabolism.

The Hormone Health Network estimates that between 5m and 6m women in the United States alone have PCOS, making it one of the most common endocrine conditions in women of childbearing age.

Women with PCOS produce slightly higher than average amounts of testosterone and other androgen hormones, which can contribute to acne, excess hair on the face, weight gain, absent menstrual periods and infertility.

Women with the condition also have an increased risk of developing a number of other health problems. “Many women with PCOS are obese, but the risk for the development of diabetes in PCOS is unknown,” explained Dorte Glintborg, one of the study’s authors from the Odense University Hospital in Denmark.


----------Editor’s Choice----------
Get your hormones back in sync
Whether you’re pre-menopausal, post-menopausal or in between – if you’re tired of gulping ice water, gaining weight and suffering through endless mood swings… Your life is about to change, again… This time for the better!
To relieve your menopause symptoms safely, you need to read this report. Click here.
-------------------------

To investigate the potential link between PCOS and type 2 diabetes development, the study team analysed two populations with PCOS.

All participants were premenopausal Danish women with a diagnosis of PCOS. One group of data was taken from the National Patient Register (18,477 women) and another from a local sub-group of 1,1,62 women who were examined at Odense University Hospital in Denmark.

The team tested the local participants for glucose, insulin, cholesterol, testosterone and triglyceride levels. They then compared the women with PCOS to other women of a similar age who didn’t have PCOS or a previous diagnosis of type 2 diabetes.

The team concluded that further research is needed to look at the effect of different factors on the risk of type 2 diabetes development in PCOS. However, they said increasing age shouldn’t be considered a risk factor because most cases of type 2 diabetes in their study were found before the age of 40.
Tags: pcos

PCOC boosts your risk of type 2 diabetes at an earlier age
Rating:
Note: 5 of 1 vote