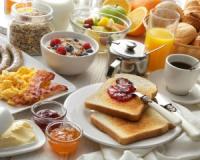 A body of research suggests that eating breakfast is key to maintaining a healthy weight, humming metabolism and good overall health. Now, a new small study published in the Journal of Physiology has found that eating a substantial morning meals also lowers your risk of type 2 diabetes and cardiovascular disease.

The study demonstrate that eating breakfast directly affects how fat cells function in your body by changing the activity of genes involved in insulin resistance and fat metabolism. These findings suggest that even if a morning meal increase your total calorie consumption, those calories may be offset by other energy-burning benefits. Keep reading for more…

In the randomised, controlled trial, the researchers asked 49 participants between ages 21 and 60 to either eat breakfast or fast until midday, every day for six weeks. Those who ate breakfast consumed at least 700 calories by 11am and at least 350 calories within two hour of waking. The participants could choose whatever breakfast foods they wanted, but most of them chose typical breakfast foods like toast, cereals and juice.

Before and after the study, the researchers measured the participants’ body composition, metabolism, metabolic and cardiovascular health. They also took biopsies of their fat cells to measure the cells’ ability to take up sugar – in other words, body’s response to changing insulin levels – and the activity of 44 different genes and proteins related to metabolism and other physiological processes.

The team found that among the participants who had normal weights, eating breakfast reduced the activity of genes involved in fat burning. In simpler terms, there was some evidence that skipping breakfast actually promoted fat burning. However, today energy balance – the most critical aspect for weight loss or weight maintenance – didn’t differ drastically between the two groups.

Eating breakfast also appeared to reduce the activity of genes involved in insulin resistance and increased the amount of sugar the cells took up, which could potentially protect against type 2 diabetes over time. “This finding is line with our previous observations that breakfast consumption is associated with better glucose control in fat cells,” Gonzalez said. “This may have implications for disease risk, but we need to work more on this.”