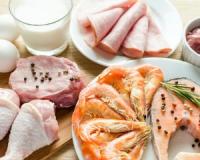 It's widely believed that eating a diet high in protein can help with weight loss. This is because high-protein foods prevent overeating and make you feel full for longer.

However, a new study published in the journal Cell Reports suggests that while a high-protein diet may help people slim down, it doesn't improve insulin sensitivity; an important health benefit that comes with losing weight.

The researchers behind this new study discovered that by eating a high-protein diet, subjects didn’t see an improvement in insulin sensitivity. In type 2 diabetes, cells slowly lose insulin sensitivity or, in other words, their ability to respond to the metabolic hormone.

Because insulin sensitivity occurs with the rising number of overweight and obese people, it may be one of the by-products of weight loss.

Insulin sensitivity is linked to increased risk of health problems like type 2 diabetes and heart disease, therefore this new study suggests that eating a high-protein diet isn’t a way to prevent such conditions.

The study was headed up by principal investigator Bettina Mittendorfer, a professor of medicine at Washington University School of Medicine in St. Louis in the USA.

To reach their findings, Mittendorfer and her team looked at 34 obese women aged 50 to 65 for a seven-month period. None of these women had diabetes.

At the end of the study, Mittendorfer concluded that the women who followed a high-protein diet saw no improvement in insulin sensitivity.

However, Mittendorfer noted that the women who diet but only ate the recommended daily level of protein saw a 25% to 30% improvement in insulin sensivity.

Mittendorfer reported in a university news release, “Women who lost weight while eating less protein were significantly more sensitive to insulin at the conclusion of the study.”

“That's important because in many overweight and obese people, insulin doesn’t effectively control blood-sugar levels, and eventually the result is type 2 diabetes,” she added.

“When you lose weight, about two-thirds of it tends to be fat tissue, and the other third is lean tissue,” Mittendorfer explained. “The women who ate more protein did tend to lose a little bit less lean tissue, but the total difference was only about a pound. We question whether there's a significant clinical benefit to such a small difference.”