Drinking coffee can restore potency in men who are experiencing erectile dysfunction due to diabetes, study finds 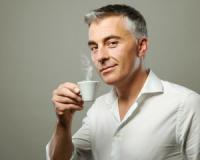 Attention, men - this one's for you!

As many as 75% of men with diabetes suffer from erectile dysfunction as a result of their blood sugar disorder. While it's common, it's of course far from ideal...

If you can relate to erectile dysfunction as a result of diabetes, you're probably wondering if there's anything you can do to take back your sultry sex life without resorting to asking your doctor for a prescription for “the little blue pill”...

And the good news is that there is! According to a study published in the Journal of Andrology, restoring your potency is as easy as drinking more coffee! And if you're already on medication to treat your diabetes-related erectile dysfunction, researchers say that you can cut back on medication by simply upping your coffee consumption!

Read on for more on this interesting new study that found a link between increased coffee consumption as a way to treat erectile dysfunction in diabetic men.

Drinking more coffee can restore potency in men with erectile dysfunction due to diabetes, study finds

The animal study study was led by Dr Run Wang of the University of Texas Medical School at Houston in the USA. Dr Wang and his team of colleagues treated diabetic rats with caffeine for eight weeks and then tested their erectile function to determine if caffeine may help promote erections through these non-specific effects.

Prior to the caffeine treatment, the rats had lower pressure in their erectile tissue during stimulation. They also had lower levels of cGMP (an erection-promoting chemical) compared to normal control rats.

After Dr Wang and his team treated the rats with caffeine, they found that their penile pressure during erection increased. They also found that the levels of cGMP in the rats increased, but not to the same levels as seen in the non-diabetic rats.

As a follow-up to this study, Dr Wang’s colleague, Dr Yutian Dai of Nanjing University School of Medicine China, is now investigating whether caffeine may have erection-enhancing effects that aren’t related to cGMP. He says he also wants to run a clinical trial of caffeine for treating erectile dysfunction in humans.

Erectile dysfunction in diabetic men is largely related to poor endothelium function, which is responsible for responding to signals to increase blood flow by dilating blood vessels.

On the market today, there are a number of existing drugs for treating erectile dysfunction, such as Cialis and Viagra. These drugs prevent the breakdown of cGMP and target PDE-5, which is specific to the penis, Wang says.

Drinking coffee can restore potency in men who are experiencing erectile dysfunction due to diabetes, study finds
Rating:
Note: 5 of 1 vote