Breakthrough: Taking Viagra may help ward off type 2 diabetes if you're already at risk for the illness 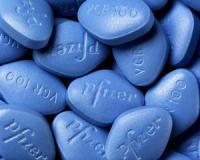 Often dubbed “the little blue pill”, Viagra is one of the most widely-known prescription drugs in the world because it's a superstar for treating erectile dysfunction.

According to a new small trial reported in the Journal of Clinical Endocrinology & Metabolism, the health benefits of Viagra go beyond a man's sex life though - it may even help you beat type 2 diabetes if you're already at risk of the illness due to factors like pre-diabetes or obesity.

What's more, the trial found that that Viagra may also help lower levels of a marker linked to increased risk of kidney and heart disease, the researchers reported. Read on for more on these breakthrough findings.

The study was funded by the US National Institutes of Health and lead by Dr Nancy Brown of the Vanderbilt University School of Medicine in Nashville in the USA.

To reach their findings, Dr Brown and her team of colleagues followed outcomes for 42 overweight men and women diagnosed with pre-diabetes. They randomly assigned each patient to take either 25 mg of Viagra or an inactive placebo three times per day for three months. At the end of the trial, Dr Brown and her team found that subjects in the Viagra group had lower levels of albumin (a marker of kidney and heart disease risk) in their urine and were more sensitive to insulin compared to those in the placebo group.

Dr Brown also pointed out that 30% of those who left their pre-diabetic condition untreated went on to develop type 2 diabetes within just five years. That said, Dr Brown noted in a journal news release that “further studies will be needed to determine whether long-term treatment with drugs like sildenafil can prevent the onset of diabetes in high-risk patients.”

Dr Brown added in the news release, “Because existing drug therapies to prevent type 2 diabetes can have negative effects on the heart or be of limited use in patients with kidney disease, strategies to prevent diabetes without adversely affecting the risk of kidney and heart disease could have a large impact on public health.”

Just how does Viagra work to keep type 2 diabetes at bay? According to Dr Brown, the drug inhibits the enzymes that breaks down cGMP – a natural blood vessel-relaxing chemical. She noted that other drugs that increase levels of this chemical are still under development.

One expert, Dr Ronald Tamler who’s a medical director at the Mount Sinai Clinical Diabetes Institute in New York City, explained further, “Drugs in this class, such as Cialis, Levitra and Viagra, have long been known to have beneficial effects not only on erectile function, but also on the function of the endothelium, the inner lining of blood vessels.”

Breakthrough: Taking Viagra may help ward off type 2 diabetes if you're already at risk for the illness
Rating:
Note: 5 of 1 vote