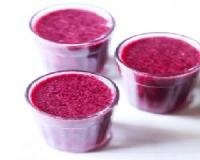 If you feel mentally tired - and thinking is becoming increasingly like hard-work for you, there's a delicious juice you can drink daily that could re-awaken your brain!

Find out below what researchers discovered in a recent study...

In the study run by the University of Exeter in England, 26 people between the ages of 65 and 77 were divided into groups after undergoing a series of cognitive tests.

One group drank 30ml of concentrated blueberry juice per day, while the other took a placebo. Nothing else changed.

After 12 weeks, the participants underwent the same tests and the group that had taken the blueberry juice every day scored better in the cognitive tests by 40% and their memory had improved by 30%!

Their MRI scans showed improved brain blood flow and gray matter activity in the blueberry group, while the placebo group experienced no improvements.

Plus, the blueberry juice also helped with one more thing - keep reading to find out what it is...

There was one more major benefit, the blueberry juice reduced depression too!

The amount of blueberry juice the participants drank - 30ml of cencentrated juice is equivalent to about one and a half cups of fresh blueberries.

So go blue for a better memory and a sharper brain!