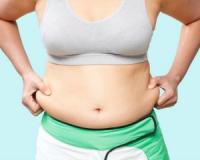 Attention, ladies! Belly fat reduces a woman's, but not a man's, chances of surviving kidney cancer, according to a recent study published online in the journal Radiology.

The study, conducted by researchers at Washington University School of Medicine in St Louis in the United States found no association between belly fat and men's kidney cancer survival at all. Read on for more.

Interestingly,, the researchers found no link between belly fat and kidney cancer survival in men.

The researchers said these findings suggest that kidney cancer develops and progresses differently in men and women. “We're just beginning to study sex as an important variable in cancer,” senior study author, Dr Joseph Ippolito, said in a university news release. Ippolito is an instructor in radiology.

“Men and women have very different metabolisms. A tumor growing in a man's body is in a different environment than one growing inside a woman, so it's not surprising that the cancers behave differently between the sexes,” he added.


Excess weight is a well-known risk factor for kidney cancer

While extra weight is a major risk factor for kidney cancer, studies haven’t proven that it necessarily affects a patient’s chance of survival. The current study suggests that the distribution of body fat affects women’s chances of survival, but doesn’t prove a cause-and-effect relationship.

“We know there are differences in healthy male versus healthy female metabolism," Ippolito said. "Not only in regard to how the fat is carried, but how their cells use glucose, fatty acids and other nutrients. So the fact that visceral [belly] fat matters for women but not men suggests that something else is going on besides just excess weight,” Ippolito said.

He concluded that these findings could lead to better ways to treat women with kidney cancer.
Tags: kidney cancer